But first I’d like to tell you a few things about the ever-elusive component of life called Unobtainium. To be more specific, about a certain sub-type of it called Unobtainium Mutatio Semperium (UMS for short).

Even though by its nature UMS likes to remain hidden, many of us have come in contact with it. It morphs into different forms, comes in all shapes and sizes, colours and smells. Rears its ugly head in the happiest moments but also in the most uncomfortable of situations. It first appears to you as a random thought and after a while shifts into a daydream, until, finally, it gets its roots lodged into your mind and you can’t get rid of it. The more you think about it, the heavier it weighs on you. It becomes an invisible hand whose grasp can start pulling at the steering wheel. A seedling growing into a tree you dream of climbing on top of one day.

UMS contagion manifests itself in the little things ‘hey, I want that dress. I think it would make me look thinner’ or ‘hey, if I just buy this piece of gear I’ll be happy for the rest of my life’. Happens to everyone, falling head over heels for the perceived benefit of an idea. This wouldn’t pose much of a problem, it’s a pretty common occurrence in the long walk of life, might even be mistaken for the pursuit of happiness sometimes. But instead of keeping things simple, mischievous Mother Nature makes UMS an ever-mutating phenomenon. An ever-shifting desire.

You wake up one day – after having the same idea of The Perfect Bass Sound for the last 15 years – wanting something totally different. Without any well documented and peer reviewed explanation. You just feel like BOOM instead of CLANK one morning. And it’s very confusing as you fear that this new disposition might cancel out all the efforts of the last 20 years, searching and researching The Holy Grail of Bass Tones. You’ve heard BOOM all your life, all around you and that was what attracted you to CLANK in the first place. BOOM was plain. CLANK is more rare and it makes you feel more special. CLANK is harder to manage, therefore makes you work harder and you appreciate that. CLANK is gold.

Then you discover the traces of UMS around you and at first it scares you. The discovery puts things into a different perspective. You realise that you weren’t chasing a dream, but in fact you were dreaming of chasing your own tail. There is no such thing as The Perfect Bass Tone, there is just the pursuit that will ultimately take you to many places and let you try out many things. And you will end up keeping those that work for you and get rid of those that don’t.

And you come to terms with the fact that you don’t actually spend copious amounts of cash on The Gear That Will Get You The Perfect Sound. But instead you are paying for your own comfort and pleasure as you go for the ride. Like switching from taking smelly cabs to work to riding your bicycle, both will get you all the way, probably both will make you smell, but you’ll end up preferring one to the other. Which one, that’s ultimately up to you. 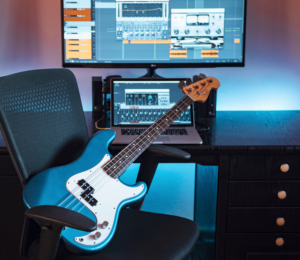 So here’s some BOOM for you

After this convoluted piece about how gear doesn’t really matter here’s a bass play through of ‘El Dorado‘, where I use too much gear, duh.

It’s a live version of the song off of our most recent record ‘Nouă‘, followed by a short and hopefully insightful explanation of how I recorded the bass for this video. If you like that sort of thing. Listening to my adorable English accent, I mean. As all in life, it’s a convoluted wörk in progress!

You can check out the whole live session I talk about in the video here – byron nouă – live la Cincșor.

Maybe even consider subscribing the Overground Showroom platform, there’s a quite a few cool concerts from Romanian artists, and the list is ever-growing.

There is an antidote to UMS, of course. It’s called NORC, but that’s for another episode.

Want to join the discussion?
Feel free to contribute!

first gig of the year 🎉 here's to tons and many

y'all have Gentle Holidays and a Wonderful New Yea

photograph me like one of your chonky german basse

Photoshopping basses as a pastime activity